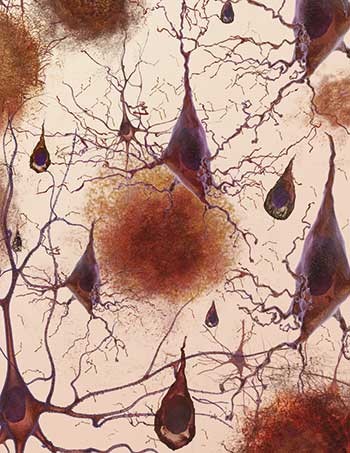 Alzheimer’s disease (AD) involves the progressive loss of memory and the ability to think. It robs us of all of those things (e.g., personality, memories) that make us human. In the end, it is invariably death. Tragically, although AD was first described over 100 years ago, no effective treatments are available.

During autopsies of patients who died of various brain diseases, doctors often see clumps or aggregates of proteins in the brains. The protein varies with the disease, but in the case of AD, the protein is called tau. In AD, tau slowly builds up in the brain and causes brain cells called neurons to malfunction and eventually die. The process is not really understood, but tau has become an important target for therapeutics to treat AD.

The Finkbeiner laboratory believes that tau accumulates because the normal cell system for clearing the excess protein is not working right. In other words, the cells garbage disposal system is not working. The excess tau gets in the way of important cellular activities, leading cells to malfunction and eventually die.

So as one strategy to treat AD, the Finkbeiner group is looking for ways to help the normal clearance system, which is called autophagy, work better. They hope to find a small molecules or potential drugs that improve the removal of tau from brain. In this way, they hope to slow down the onset of AD. Delaying the disease is important because the symptoms of AD are generally most pronounced later in life. Even a small delay in the progression of AD could significantly improve the quality of life of the patients and reduce the burden to the healthcare community.

To test their hypothesis, the Finkbeiner laboratory developed some powerful tools. For example, they invented a robotic microscope that can follow individual neurons for up to months. They also use a special kind of stem cells called induced pluripotent stem cells (iPSCs), which are made by reprogramming patient skin cells into stem cells. Those stem cells can then be prompted to develop into different kinds of neurons and other cells that can be used to study disease. Next they developed small molecules (potential drugs) that stimulate autophagy in neurons. They plan to test them for their ability to stimulate autophagy and to rescue cognitive deficits in mice.

A very special bonus is that these small molecules might stimulate autophagy to clear other types of protein clumps. In that way, they might also work to treat other neurodegenerative diseases, including amyotrophic lateral sclerosis, Huntington’s disease, frontotemporal dementia, and Parkinson’s disease too.