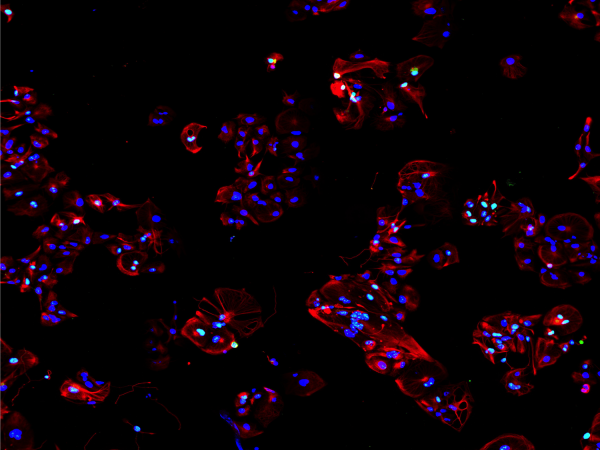 For many years, scientists in the Finkbeiner lab had to rely exclusively on animals as research models for their studies of degenerative brain diseases. However, people are different from mice and rats, and so, those studies were not always helpful in understanding human diseases. Still, they were the only option in a field where invasive research on humans was, for obvious reasons, impossible.

We’ve come along way since then. Today, Finkbeiner researchers, such as Dr. Gaia Skibinski, use cutting-edge technology to create custom-made, entirely human neurons with many of the characteristics of Parkinson’s disease (PD). These single-cell disease models provide Dr. Skibinski and her team with new insights into PD and help them to continue their search for possible new treatments. But it’s taken a long time and a lot of work to get here.

Previously, the standard practice involved harvesting neurons from rats. Dr. Skibinski and her team would choose specific genes that appeared to be related to PD in humans and would genetically transfer those genes into the rat neurons in a process called transfection. The neurons would then begin to mimic some characteristics of a PD patient’s cells: a cell model of how the disease behaves in a living organism.

Until recently, this technique was among the best options for studying cells with PD, but it had significant limitations. Using rat neurons required precise timing, and the neurons were mature animal cells, not stem cells and could not reproduce themselves. So, Dr. Skibinski was limited to a certain number of neurons per rat. More importantly, rats simply don’t manifest the disease the way humans do. The rats didn’t reliably develop the kind motor symptoms typical of PD patients or lose dopaminergic neurons, the cells targeted in human PD. Given these issues, Dr. Skibinski and other scientists argued that it may not be possible to effectively use rats as models to study PD. They suspect that the current spate of failed PD drug trials may be due to this lack of rat-human translation. Rats are just not people.

The invention of induced pluripotent stem cells, or iPSCs, changed all of this. With this remarkable technology, scientists, such as Dr. Skibisnki, can now reprogram skin cells from individuals with PD into infinitely dividing stem cells. Furthermore, with the right chemical encouragement, the iPSCs can be transformed into any other kind of cell, including the dopaminergic neurons Dr. Skibinski needs for her PD research. Making iPSCs and then developing them into neurons allow Dr. Skibinski to create a much more precise—and human—cell model for studying PD than she had during the era of animal-based research. She and her team incorporated iPSC-derived neurons into their standard research techniques about 5 years ago. Doing so resolved some of the problems of working with rat neurons and opened up many new possibilities.

The new iPSC-derived dopaminergic neurons provide a more accurate but smaller-scale model for studying PD. Searching for signs of PD in a single cell instead of a network of neurons or live animal can be difficult, but Dr. Skibinski and her team look for specific symptoms such as degeneration in the branches of neurons and breakdown of organelles, signs that PD may be affecting a cell. And since these neurons are human—and share the DNA of patients who donate—they’re physiologically useful for comparisons and experiments that would have been impossible in rats.

Still, even PD models based on patient DNA have drawbacks. Since different mutations can cause PD, not all individuals with PD look the same genetically. And comparing one patient’s iPSC-derived neuron to another healthy neuron can be tricky. Two such neurons chosen randomly must be very different genetically, making identifying meaningful differences very difficult.

To properly read through that noise, Dr. Skibinski’s team now prefers to use genetically edited or gene-corrected lines. With the help of recently developed technology, Dr. Skibinski and her team have found gene editing to be a solution to the problem of natural genetic difference. They take cells from a patient with a mutation in a specific PD-related gene and use gene-editing technology to correct that single mutation. Now, they have two groups of cells that are, at least in the most important ways, identical—except that they’ve been corrected at a single site. It’s much easier to compare these groups with the other natural variations controlled. In this way, genetic editing presents a kind of an intermediate step between rat neuron models and patient iPSCs and addresses the problems of both.

The rat neurons, iPSC neurons, and gene-edited neuron models of PD have helped Dr. Skibinski and her team make important research strides. One study using this combination of techniques showed that cells with misshapen mitochondria—similar to those seen in PD patients—die more quickly, helping researchers to better understand the role mitochondria plays in PD. Another study helped further the understanding of how three key proteins interact in the cells of individuals with PD.

The new PD modeling technologies allow Dr. Skibinski to ask deeply productive questions about the disease and to begin addressing the challenges that remain in PD research. For example, recognizing dopaminergic neurons—which can look very similar to other types—is particularly difficult. Dr. Skibinksi is working to develop a way to more easily tell the difference between neuron types; the solution may lie in machine learning. Her hope is that easier differentiation will clear the way for the best PD model yet—one that so strongly mimics the disease that it could be reliably used to find new therapies on an as yet unprecedented scale.