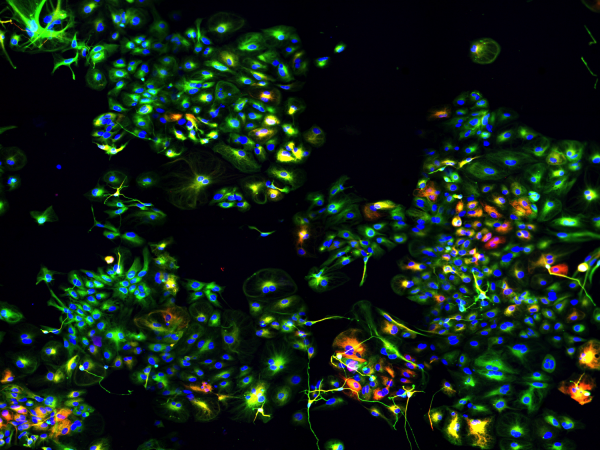 Is ALS caused by a failure to take out the trash?

Believe it or not, we have some things in common with a loaf of bread. Autophagy, our cellular trash disposal system, hasn’t changed much throughout the course of evolution, going all the way back to yeast. Processes that have been maintained so carefully throughout evolution are often very important to the cell.

The study of autophagy in yeast began in the 1980s and 90s, helping scientists better understand the way the human body recycles the materials that build up in our cells. Now, Finkbeiner lab researchers at the Taube-Koret Center (TKC) are using some of those commonalities with yeast to better understand amyotrophic lateral sclerosis (ALS) and to develop new drugs to treat it.

As the cell goes about its business, it proteins and organelles sometimes wear out or break down. To keep things running smoothly, that trash is swept up by tiny internal cleaners called autophagosomes. They keep a cell healthy by grabbing the damaged parts, engulfing them in a fatty lipid bubble, and carrying them to a highly acidic digester called a lysosome, which breaks up the trash so it can be reused.

The cell is a busy place, and even a small amount of trash lying around can gum up the works. In fact, neurodegenerative diseases, such as ALS, may result in part from a breakdown of autophagy, so that the neurons can no longer effectively clean up after themselves. This connection between autophagy and cell function offers a hint for possible new ALS drugs. The Finkbeiner lab found that inducing autophagy with existing drugs dramatically reduces cell death in diseased neurons.

The therapy development process at Finkbeiner

Several years ago, a Finkbeiner lab scientist discovered serendipitously that a particular class of antipsychotic drugs promotes autophagy in neurons. Because the antipsychotic drugs in question can have harsh side effects, TKC scientists used a sets of several experiment called a “structure activity assay” to isolate and promote only the molecular elements of the drug that encourage autophagy. Those elements are the building blocks for a new experimental ALS therapy.

To test new compounds for their ability to promote autophagy, Dr. Javaherian and his team genetically joined the protein LC3 (found in all autophagosomes and thus a good marker for identifying them) with a special protein made from coral that shows up red under UV light. Using that UV light and the Finkbeiner lab’s robotic microscope, Dr. Javaherian and his team track the amounts of red protein in the cells. Since that protein is bound to autophagosomes, the red protein becomes a handy surrogate marker and a relatively simple way to measure the rate of autophagy in those cells in real time. (More information about the robotic microscope)

In other studies, Dr. Javaherian and his team use different red and green proteins to track autophagy in mice. In these studies, autophagosomes show up as tiny red “puncta” dots under a microscope. Before the autophagosome transporter fuses to the lysosome digester, Dr. Javaherian and his team can see both red and green puncta, but once that two fuse, the very acidic environment in the lysosome eliminates the green proteins. Keeping track of the ratio of red to green puncta over time allows them to effectively measure autophagy.

Dr. Javaherian has shown that this new compound promotes autophagy in ALS neurons in lab. They also tested the compound it ensure it is not toxic to the mice. Now, the big question: Will the compound work in a live animal?

The Finkbeiner lab hopes to answer that question this winter. The first step will be making sure the new compound can cross the blood-brain barrier—not an issue for neurons in a dish but very important in a live human or animal system (the blood brain barrier is a highly selective permeable membrane that protects the brain from circulating blood and not all compounds in circulation are allowed to access the brain). This is a big question. Another drug called rapamycin that promotes autophagy elsewhere in the body isn’t very effective at treating or even accessing the brain.

If the new compound can cross the barrier, Dr. Javaherian will ask the next question: Does the compound induce autophagy in live neurons in a brain? They will test it in a mouse model of ALS. These mice have been genetically modified to replicate some of the main symptoms of ALS.

Animal studies can be time consuming, but Dr. Javaherian and his team hope to know in the next few months if the compound induces autophagy in the neurons of live and healthy mice. From there, it will be another few months to complete testing in mice genetically modified for ALS. Processing the data is also time consuming. Each study produces up to 20,000 images with the robotic microscope, and each one has hundreds of puncta to count.

Even after a successful treatment in mice with ALS, the journey will still just be the beginning. For Dr. Javaherian, the ideal outcome of all his work at TKC would be a partnership with a pharmaceutical company that can help share the time and expense that FDA approval requires.

Although obstacles remain—human trials will require a new non-invasive way to measure autophagy—Dr. Javaherian remains hopeful. His goal is to combine the wealth of research, information, and technology behind this project, to stimulate autophagy in humans, and to show that it’s helping improve ALS outcomes. It’s a possibility that’s not so far away.