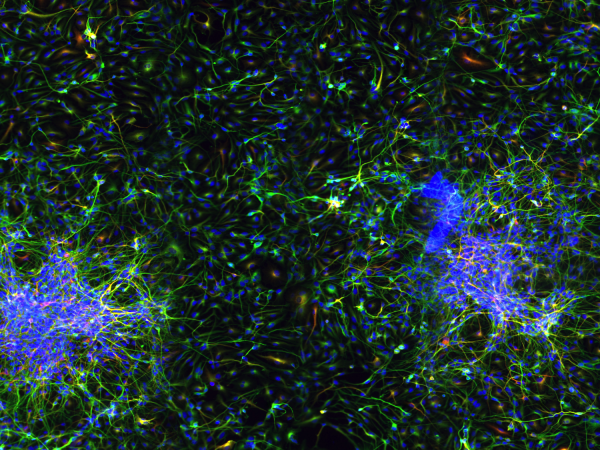 Stem cells have amazing promise for making replacement tissues and organs. However, while that application might be some years in the future, stem cells have already proved to be a welcome breakthrough for neurodegenerative disease research. This is particularly true for a specific type of stem cells called induced pluripotent stem cells or iPSCs that were discovered by Gladstone investigator Shinya Yamanaka.

So what’s the big deal about stem cells? For starters, they are human cells. For many years, scientists have been studying human diseases in various animal models, mostly mice and rats. In fact, a lot has been learned about diseases from those animal models. However, over the last years, many drug candidates that showed very promising results in mice have failed in clinical trials. After all, putting human genes into mice still leaves the human genes in the context of all of the other mouse genes and proteins. That and perhaps mice and humans are simply too different physiologically to allow easy extrapolation of results from the lab to the clinic. In response to those concerns, scientists have begun to seek alternative models, such as human cells.

Human cells aren’t always that easy to come by. But Dr. Yamanaka’s discovery made stem cells—specifically iPSCs—readily available for other researchers. In 2006, he found that ordinary skin cells could be “reprogrammed” to become iPSCs by incubating them with the appropriate protein factors. Like embryonic stem cells, iPSCs have the two characteristics of stem cells: they can reproduce themselves indefinitely, and they can develop into any type of cell in the body.

The Finkbeiner laboratory has used this remarkable discovery to develop new models of disease. They have taken skin cell samples from patients with various neurodegenerative diseases and created iPSCs. Because iPSCs can develop into any cell type in the body, the scientists have used those iPSCs to create cell lines of different types of brain cells, including multiple types of neurons and glial cells.

The really exciting aspect of this technology is that the cells are human cells, not mouse cells. Even better, these human neurons come with all of the genetic information from a person with the disease.

The Finkbeiner laboratory has studied those cells to find specific characteristics (these are called phenotypes) that represent the disease. For example, neurons from a patient might not live as long in culture as those of a person who does not have the disease. This shorter lifespan can then be used as a marker of the disease, and compounds can be tested with the lab’s robotic microscope to see if they restore the normal lifespan to the cells. Those compounds might then become drug candidates.

For example, skin cells taken from a patient with Huntington’s disease can be reprogrammed into iPSCs and later caused to develop into neurons. Those neurons can then be used to look for disease-relevant markers that show differences in normal and disease lines as early as the neural precursor cells that later develop into neurons. They also allow the scientists to compare the genes that are turned on or off and how long the cells survive. And they can do this with human neurons that differ in the length of polyglutamines that cause the disease. Patients with long stretches have symptoms earlier than those with short sequences.