Understanding beyond the Snapshot: How the Robotic Microscope changed neurodegenerative research 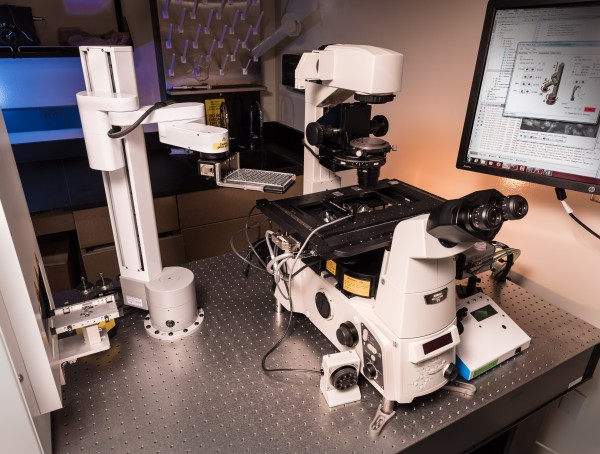 Many neurodegenerative diseases feature clumps of protein in neurons (brain cells), and for many decades, these clumps were considered to be the culprit in killing neurons. Scientists reached this conclusion by looking at snapshots of neurons, where they saw that healthy people did not have clumps while sick people did. Therefore, these clumps of proteins must be bad, right? However, after carefully tracking nuerons and observing their behavior over time, scientists at the Taube-Koret Center (TKC) found that neurons that develop clumps, in fact, live longer than those that do not. Thus, in particular cases, the clumps can actually be a protective response.

Knowing what is happening to individual cells over time is key to coming to the correct conclusion. In order to learn about and understand the protein clumps, scientists at TKC used a robotic microscope. Robotic microscopes allow researchers to image the exact same place on a plate of neurons multiple times over the course of many days and can measure the same neuron over its entire lifetime; this method of observation is called a longitudinal study. Longitudinal studies allow researchers at TKC and Finkbeiner lab to pick apart particular risk factors of diseases and determine which of those contribute to neuronal death. The robotic microscope images and follows thousands of individual neurons over the course of the disease, thereby increasing the statistical power of the experiment and enabling researchers to identify specific factors of the disease to be detrimental or not.

Huntington’s disease (HD) is one of many areas where the robotic microscope has revolutionized the understanding of neurodegenerative diseases. HD is caused by a mutation in the gene that encodes for a protein called huntingtin (htt). In HD patients, the htt protein is not correctly folded and loses its functionality, leading to the disease. The misfolded protein often forms clumps or inclusion bodies, which are sticky, large insoluble aggregations of htt protein.

For many years, inclusion bodies were assumed to be the main cause for the neurodegeneration in HD patients. Using the robotic microscope, TKC scientists were able to observe neurons showing characteristics of HD over their entire life, and thereby discovering that inclusion bodies are a protective mechanism by the cell. With a more complete picture of the cell, Dr. Steven Finkbeiner and his team showed that the neurons that formed inclusion bodies survived longer than neurons with other forms of the htt proteins (such diffuse toxic htt).

These conclusions were possible because the robotic microscope can record the events occurring within thousands of individual cells over time. Harnessing the power of the robotic microscope and the downstream analysis software has allowed TKC scientists to be at a unique advantage of being able to conduct “hypothesis-free science”, allowing them to simply observe and pick apart trends leading to cause and effect of the disease.